Ozon is one of Russia’s largest e-commerce platforms, ranked second by number of orders and fourth by revenue in the E-Commerce Index Top 100 for 2018. Ozon offers customers more than 1.6 million SKUs across 24 categories.

In March 2019, Sistema acquired an 18.7% equity stake in Ozon Holdings Limited from PJSC MTS for RUB 7.9 billion, bringing Sistema’s total stake in Ozon’s equity to 19.3%. In April 2019, Sistema further increased its stake in Ozon to 21.9% following the acquisition of shares from a number of Ozon minority shareholders.

In addition, Sistema_VC, a venture capital fund that is part of Sistema Group and invests in growth-stage tech companies, also holds 16.3% in Ozon.

As of the end of 2018, Ozon operated eight fulfilment centres occupying a total of more than 100,000 sq m, allowing the company to deliver products to 40% of the Russian population the day after an order is placed. In December 2018, the company set a record for orders processed – 138,000 orders in a single day. In 2019, the company plans to more than double its logistics infrastructure by expanding its flagship distribution centre in Tver and opening a new 100,000 sq. m fulfilment centre in the Moscow region.

In 2018, Ozon’s business grew at its fastest rate in the last decade. Ozon.ru gross merchandise value (GMV) in 2018 grew by 73%. Some product categories – including clothing and foodstuffs – posted revenue increases in excess of 100%.

In 2019, the company plans to stick to its aggressive strategy, aiming to conquer the wider market. Immediate initiatives include large-scale investments in logistics infrastructure, the expansion of a distribution centre in Tver, and the launch of a new fulfilment centre near Moscow with a total floorspace of over 100,000 sq. m. 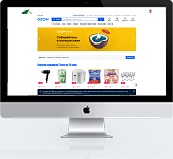